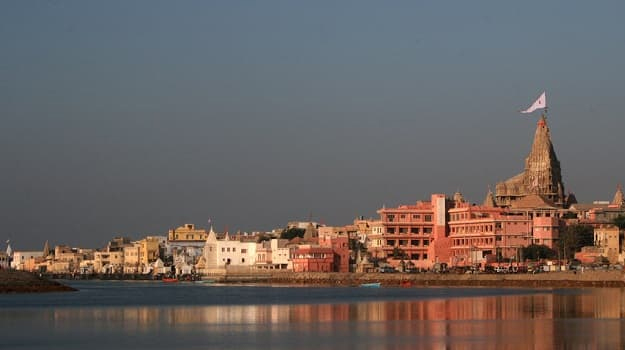 Shree Dwarkadhish Temple honors “Lord Krishna” and attracts thousands of pilgrims from different parts of the country, The Dwarkadhish Temple (also known as Jagat temple) and its Sikhar rises to 170 feet. The Pataka or flag of the temple is changed three times a day. It is said that Lord Krishna spent about a hundred years in the city of Dwarka. Thereafter, Dwarka became the holy shrine for the Vaishnavas, followers of Lord Vishnu (an incarnation of Lord Krishna)

Dwarka is the legendary city, the residing place of Lord Krishna one of the religious places in Gujarat on the shore of the Arabian Sea, the extreme west coast of Gujarat (Jamnagar district) as Lord Krishna is affectionately called in Gujarat, came to Dwarka from Mathura to build his new kingdom, The importance, foundation, planning and glory of Dwaraka as the golden city is described in various Hindu epics like Mahabharata, Harivamsha, Sijupdlavadha, Bhagavad Gita, Skand Purana, and Vishnu Purana. It is a common belief that 5,000 years ago, Lord Krishna declared Dwarka as his capital after he left Mathura, Dwarka It is among the seven ancient cities of India.