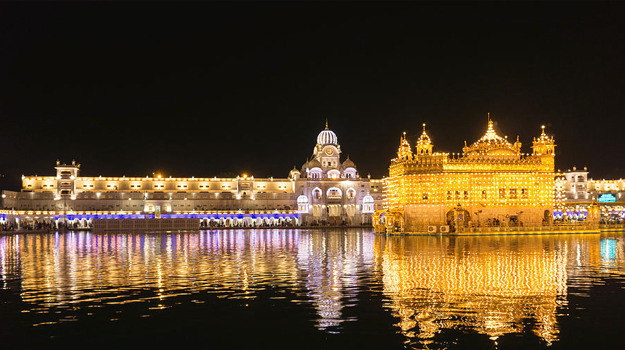 Shri Harmandir Sahib, also known as the Golden Temple in Amritsar is the holiest shrine of the Sikh religion. Also known as the Shri Darbar Sahib, it is in the center of the old part of Amritsar. This Temple is the pride, and soul of the Sikhs, Construction of this Temple began in 1574 on land donated by the Mughal emperor Akbar, The temple was completed in 1601.

The temple had to be substantially rebuilt after it was sacked in the 1760s.In the early 19th century, 100 kg of gold was applied to the inverted lotus-shaped dome and decorative marble was added, The architecture of the golden temple is a blend of the Hindu and Muslim styles, Wagah Border is one of the must-visit tourist places in Punjab. It is the only road border crossing between India and Pakistan and located at a distance of around 30 km from the Golden Temple.

Harmandir is not only a place for mental solace, but it also provides the rarest of artwork to the visitors and art lovers visiting this shrine. The art displayed here is neither a copy of Islamic art or Hindu traditional art but a rare work of craftsmanship of fine art by Sikh Artists.