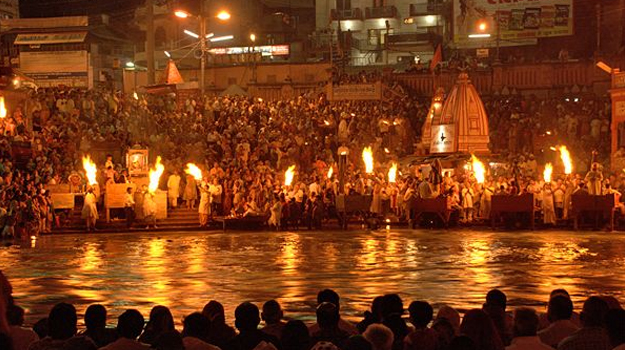 Shri Kashi Vishwanath Temple dedicated to Lord Shiva one of the most famous Hindu temples in Varanasi – Uttar Pradesh, the temple situated on the banks of the holy river Ganga, this temple is one of the twelve Jyotirlingas, meaning Vishvanatha is Ruler of The Universe temple has destroyed and re-constructed many times in the history, the last temple was destroyed by the sixth Mughal emperor Aurangzeb, then he was constructed Masjid on its site, the present temple was built on an adjacent by Maharani Ahilyabai Holker who was a Maratha ruler in 1780, and now The Kashi Vishvanath Temple has been managed by the state government since 1983 however during the time of Shivratri the chief officiating priest will be Kashi Naresh (King of Kashi)

According to legends Varanasi was founded by Lord Shiva and it was his favorite abode. In one verse of the ancient religious text of Skanda Purana, Shiva says “The three worlds form one city of mine, and Kashi is my royal palace therein and Varanasi for different reasons, Although Varanasi is popularly called the city of Lord Shiva, it is at once the city of temples, the city of ghats the city of music, and the center for Moksha or nirvana, It is believed that three nights of fasting in Varanasi city can reap you rewards of many thousands of lifetimes of asceticism.

Varanasi is a holy city in India – also known as (Kashi and Banaras) A city of Moksha for Hindus since centuries that has seen the world turn, Varanasi which has been standing the tests of time for over 5,000 years is said to be one of the oldest inhabited cities in the world, and Varanasi is considered as one of the Best  Pilgrimage places to visit in India. Varanasi is older than history, older than the tradition, older even than the legend, Varanasi the Holy City of Light Shines brightly for Hindus both physically and metaphorically It is believed that a single dip in the holy waters of the Ganges can wash away a lifetime of sins.