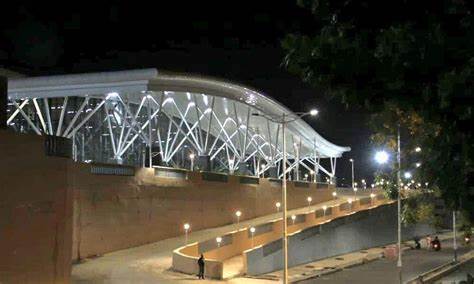 India’s first AC railway terminal would be operational soon in Bengaluru Karnataka, Union Railway Minister Piyush Goyal said on Saturday that country’s first centralized air-conditioned railway terminal would be operational soon in Bengaluru. According to Indian railway officials, the new coach terminal was planned at Baiyappanahalli in the city to meet the demand to introduce more express trains connecting Bengaluru. this is the third railway terminal in the Baiyappanahalli area built along the lines of Bengaluru’s Kempegowda International Airport. and has been a long-standing demand for introducing more express trains connecting the IT city.

Byappanahalli is India’s first AC railway terminal and, the third coach terminal sanctioned in 2015-16, The terminal was built at a construction cost of ₹314 crores, The state-of-art station building of 4,200 sqm will cater to a daily footfall of 50,000. It has been reportedly designed to have an ambiance and services similar to that of an airport. As many as 50 trains can be operated from the station daily. The new terminal has a fully air-conditioned entrance lobby and a well-marked parking space for four-wheelers and two-wheelers with a capacity of 250 and 900 respectively.

The terminal is named after foremost engineer and scientist Bharat Ratna Sir M Visvesvaraya, and is located in the Baiyappanahalli region in Bengaluru city. Baiyappanahalli also has a metro station. The new terminal has 7 platforms apart from 8 stabling lines and 3 pit lines. A foot over-bridge along with two subways will link all platforms. The escalators and lifts will connect seven platforms to facilitate passenger movement. The new terminal was earlier reported that Bengaluru Railway Division had set February 15 as the inauguration date. but due to certain reasons, it was put on hold. This terminal’s location was purportedly chosen so as to decongest the already functioning stations and make space for more trains to meet the demand of an increasing number of passengers traveling to the city.