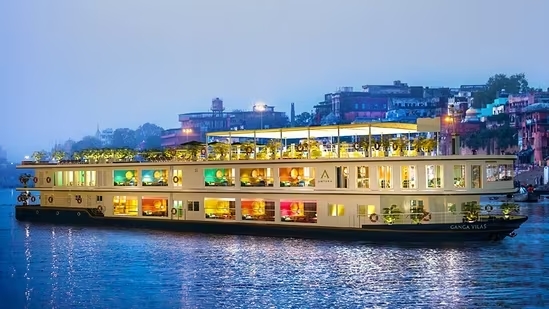 MV Ganga Vilas cruise set off on a historic journey on January 13 from Varanasi and will reach Dibrugarh in Assam on 1st March 2023, so the cruise will cover approximately 3200 kilometers across 27 river systems in 5 Indian states and Bangladesh in 51 days.

Prime Minister Narendra Modi said inauguration of the MV Ganga Vilas cruise will take India’s tourism to the global heights, many other inland waterways projects worth more than 1000 crores foundation stones have been laid already.

MV Ganga Vilas is the world’s longest river cruise which is planned to cover around 50 tourist spots include National Parks, World Heritage sites, and the cities of Patna, Guwahati, Kolkata and capital of Bangladesh Dhaka.

MV Ganga Vilas cruiser has 3 decks and 18 suites it can house 36 tourists. The first batch of tourists will be from Switzerland. According to the Ministry of Ports cruise passengers are going to have the experience of Varanasi’s famous Ganga Aarti, Sarnath the site revered by Buddhists, and see Majuli. Kaziranga national park in Assam is also the part of the journey.

According to the company the luxury cruise package are ₹42500.00 for one person and ₹85000.00 for two for a suite per night, so whole package would be ₹40 lakh plus taxes approximately. Kashif Siddiqui, the director of sales and strategic marketing of the company said suites on the ship were sold for ₹38 lakh for double occupancy for the entire trip of 54 nights around a year ago.

You can book the ticket through the website of the Antara Luxury River Cruises, the company that operates the ship. The cruise is fully booked and will not be open to the public for the next 2 years, company official said.