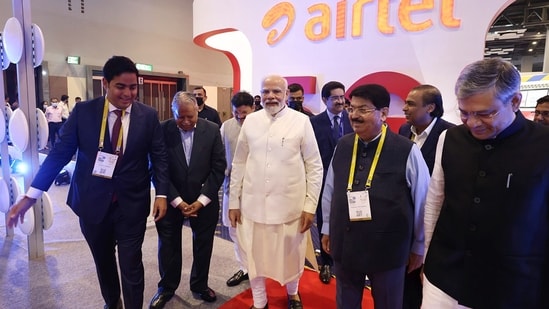 5G is a gift to 130 crores Indians from telecom industry. India was dependent on other countries for 2G, 3G and 4G technologies, but now with 5G, country has created a new history and is setting a global standard in telecom technology for the first time he added.

Union Minister of Communications Mr. Ashwini Vaishnaw, Mr. Mukesh Ambani from Reliance, Mr. Sunil Bharti Mittal from Airtel and Mr. Kumar Mangalam Birla from Vodafone Idea shared the stage with the PM Modi and committed to a fast roll-out of “affordable” 5G services in the country.

Airtel announced 5G services in eight cities, including Delhi, Mumbai, Bengaluru and Varanasi and planning to cover the entire country by March 2024. Jio will start 5G services this Diwali and committed to deliver 5G services in India by December 2023. and Vodafone Idea said will begin the roll out 5G services soon however the date is not announced.

Prime Minister Modi said New India will not remain a mere consumer of technology, but also India will play a big role in designing the future wireless technology and will play an active role in the development and implementation of the technology. He also added that 5G technology will not be limited to speedy internet access, and it has the capability to change lives of everyone. India had 25 crore internet active connections in 2014, but today stands now at 85 crore active users. more internet users are coming from rural areas.

Digital India is not just a name, it is more than just a govt scheme, also a big vision for the development of the our nation. The goal of this vision is to bring that technology to the common people which works for the people. he added.

Union Minister Ashwini Vaishnaw said as 5G services launched in India, state owned telecom operator Bharat Sanchar Nigam Limited (BSNL) may launch 5G technology on its network by August 2023. So that way country will have a good three private player (Jio, Airtel and VI) one public sector player (BSNL) ecosystem of four competitors in the Indian market, and the tariff of 5G would remain as affordable in the market. he added.